The year 1998, with the appearance of sildenafil, marks a before and after in the treatment of ED. Later, in 2003, vardenafil and tadalafil and later, in 2013, avanafil would arrive. At present, this group of type 5-phosphodiesterase inhibitor drugs is the front line of ED treatment because of both their effectiveness and their safety. The IPDE-5’s stimulate relaxation of the smooth muscle of the corpora cavernosa and promote erection. It is important to know that their action depends on the existence of suitable sexual stimulation and that otherwise they will be ineffective.

The most frequent side affects of the IPDE-5’s include headache (15%), indigestion (4-10%) and reddening of the face (4-10%). In the case of tadalafil, back pain and/or muscular pain (3%) may occur, while with sildenafil there may be blurred or blue-tinted vision (0-3%). In the case of vardenafil, care must be taken if the patient is being treated with antiarrhythmics (quinidine, procainamide, sotalol, amiodarone). Precautions should also be taken if the patient is taking alpha blockers (drugs used to treat high blood pressure and prostatitis). The use of IPDE-5’s is completely contraindicated in patients taking nitrates (sublingual nitroglycerins, isosorbide dinitrate), since the combination of the two drugs produces a severe drop in blood pressure that can be lethal.

In 2012 the use tadalafil in daily doses of 5 mg was approved for the treatment of urinary symptoms secondary to benign hyperplasia of the prostate.

In the 1980’s it was discovered that the injection of alprostadil or prostoglandin E1, a powerful vasodilator, in the corpus cavernosum caused an effective erection without the need for sexual stimulation (fig. D). The treatment is effective in 70-80% of patients with ED. The dose varies between 10 and 20 micrograms. The most frequent side effect is pain at the point of injection and a painful erection, something that occurs in 11% of the cases. An excessively prolonged erection or priapism may appear in 1-5% of the patients. It is contraindicated in patients under treatment with antidepressants of the monoaminooxidase inhibitor group (MAOI’s). 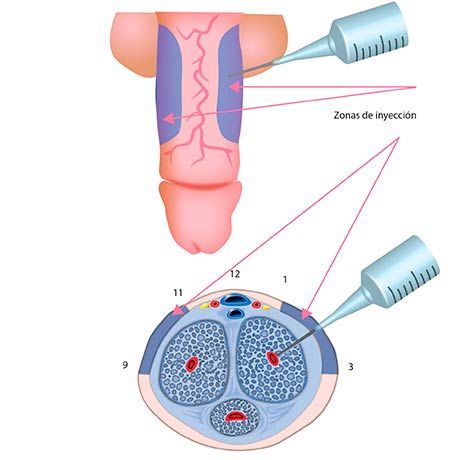 In 1996 a system called MUSE (Medicated Urethral System for Erection) was developed that makes it possible to apply alprostadil through the urethra without the need for an injection. Using a suitable device, a tiny suppository (1 x 3 mm) is introduced into the urethra and the medication is absorbed through the urethral mucosa and from there passes to its activation site, the corpora cavernosa (fig. E).

The doses used are 250, 500 and 1000 micrograms and the erectile effect appears 15-30 minutes later and lasts for about one hour. Fifty percent of the patients respond well to this form of treatment. The most frequent side effect is penile pain in 30% of the patients and very mild urethral bleeding in 5% of the cases. Only 5-6% of the women had vaginal burning. A condom must be used in sexual relations with pregnant women. 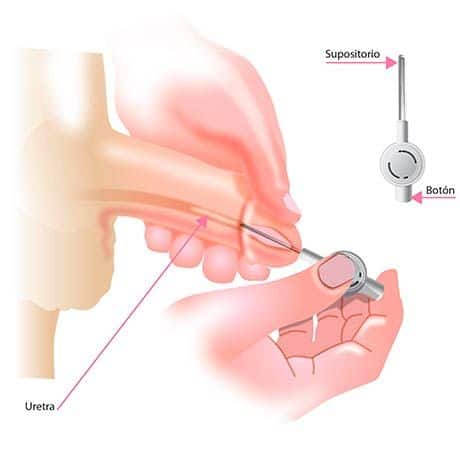